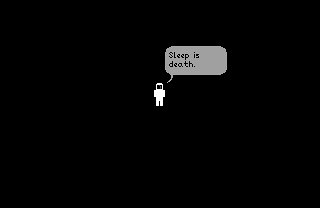 Jason Rohrer’s latest game appeared out of nowhere for me. It’s a role-playing/interactive fiction tool with which two people can create a story together. The controller of the game concocts a story, makes the artwork and music, and then controls a set of scenes to make a story. The player is assigned a character and can move, speak, or apply verbs to things, like pick up, etc. The controller and player take turns, both adapting to the actions of the other, with the controller generally trying to take the story on some intelligible narrative arc, or not. Here’s an example game that has been played.

I’ve been thinking about this type of game ever since reading a book called Diamond Age by Neil Stephenson. A game where a person, or persons, in real-time direct out the game that a player or many players are taking part in. As an alternative to creating smarter AI to direct our games we could spend time developing tools and a culture of humans directing games. In the future, could their be an equivalent of a highly paid movie director whom directs games in real-time? I can’t see why not.

Anyway, back to Sleep Is Death!