I am now a married man. I decided to keep my name, my wife however has changed hers. Luckily there’s no other Mrs Porter in my immediate family otherwise it could have been weird. Having a common family name unites us (against the evil military-industrial complex), however why should we take one name over the other? Hyphenation can only lead to confusion after two or so generations as the surnames increase exponentially in length. A better alternative in my opinion is to create a third name that both parties changes their family name to. This third name could be a mashed version of the two surnames, or alternatively a new, more superior, name. For instance, mash Buckley and Porter and get Bucter or Portley. I wonder how other cultures handle this issue? No doubt they are as phallocentric as ours.

Our wedding was in the Royal Botanical Gardens of Melbourne, a strange choice for the middle of winter. The weather on the day was clear and sunny, raining the moment after we said our I dos. The event went smoothly and I think all our guests had a great time. I am very humbled to now be formally wed to my soulmate. 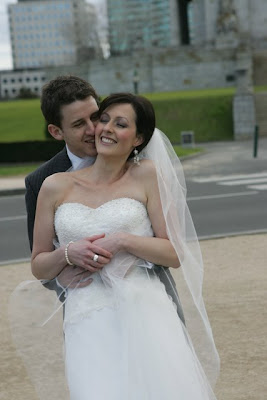 We honeymooned in Vietnam, which was a compromise between my choice of Madagascar and Steph’s choice of Hawaii. It was no compromise, we absolutely loved the country. It’s an awe-inspiring and very dynamic country, seemlessly blending the authentic and traditional with self-organised cities and a rapidly developing economy. We spent three weeks exploring Vietnam with a full itenary the entire trip. In brief we started at Ho Chi Minh city, where the 3 million + motorbike owners (hello, moto?) and their self-organised traffic really opened my eyes to the stability of apparently chaotic systems. We toured around the Mekong Delta on a boat and visited Cu Chi where the Vietcong had established 200km of underground tunnels to live in and fight from during the American War. Here I am climbing into a secret entrance, there is no way I could have climbed through the tunnels it lead to though, wayyyyy too small. 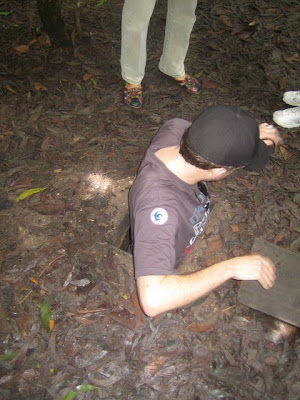 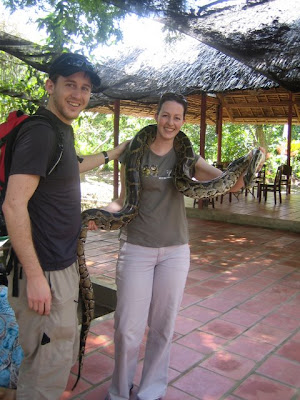 At the Temple of Literature in Hanoi there are numerous stone stelae with the names of students who had graduated with a doctor of philosophy. The earliest one is from the 15th century. They rest on giant tortoises. A tool poses in front of them. 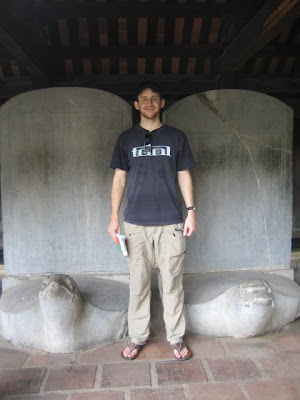 Yes, a kangaroo with glowing red eyes. To be mysterious I won’t say where this is … but it’s definitely in Vietnam. 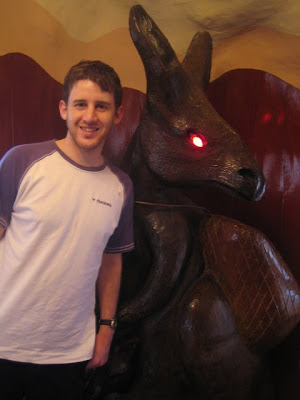 I observed a few things while abroad. These are my naive generalisations…

Two: Everybody in Vietnam has a very specific job. Proof by example, while sitting on a beach a man would come by every 10 minutes, collect the shells and sea debri that had washed onto the shore, then throw them back into the ocean. The waves kept throwing more stuff onto the beach, but his job was to keep it spotless. Also, whilst eating at a restaurant one girl had the sole job of maintaining the level of fish sauce in our fish sauce receptacle. An extreme example of the generalist-specialist social theory?

Three: Everyone says “Hello!”. It is not uncommon to have this said to you many times on a walk around a town or city. Sometimes it is a curious poll. Sometimes it is a friendly greeting. Othertimes (though rarely) it is a barbed insult.

Four: You can’t fit five people on a motorbike.

Five: Four people on one motorbike is the strangest thing I’ve ever seen on a bike. Except for this: 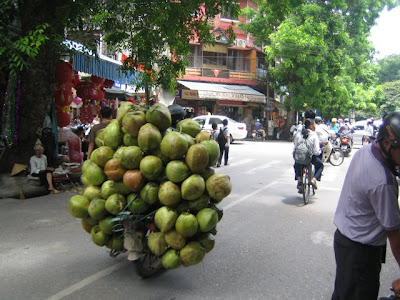 … and maybe this Choco Pie. Originating in Korea, the Choco Pie is similar to a Wagon Wheel, but imho not as tasty. Props to the manufacturer for giving it such a clear name, it’s quite obvious what you are getting yourself into when you purchase this food ware, and it does not pretend to be anything else (unlike Nutri-Grain…) And how can resist their website…? (sound on)