I have now finished all required work for my PhD probationary confirmation, and have successfully been confirmed. This means that the confirmation panel are convinced that I have a valid research proposal and a plausible schedule over the next 2 years.

I enjoyed my caek last night. It was a dodgy banana cake from safeway. It wasn’t bad.

My research involves the design and implementation of a creative system that grows geometry using principles from biological development. The shapes (organisms) consist of cells that grow, divide, move and die, following a genetic program specified by the user/artist. This general methodology has been successfully demonstrated with Lindenmayer Systems through Prusinkiewicz’ (and others) great work. My work looks at different structures and is directed at modelling organisms such as the Siphonophorae illustrated by the 19th century naturalist and artist Ernst Haeckel. One such illustration (my replication) is shown below. 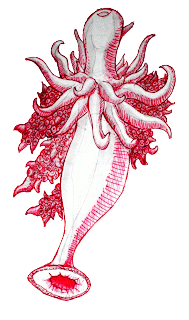 And on other news I ran my first fun run on Sunday. The Run for the Kids fun run attracted nearly 30,000 runners and supports the Royal Children’s Hospital. I made it the entire 14km in under 80 minutes — which was my target. It wasn’t a fast time (1hr17m) but it’s a starting point and I hope to knock at least ten minutes off next year. It was an awesome experience and I think I’ll be running a few more over the years.