I just added another paper to my list of publications. This paper describes how Fugu works, and illustrates how some complex forms can be created with the system. The paper is yet to be published, but a pre-print/draft can be downloaded from here if you’re interested in procedural organic geometry generation.

We describe a flexible, script-based system for the procedural generation and animation of 3D geometry. Dynamic triangular meshes are generated through the real-time execution of scripts written in the Lua
programming language. Tight integration between programming environment, runtime engine and graphics visualisation enables a workflow between coding and visual results that encourages experimentation and
rapid prototyping. The system has been used successfully to generate a variety of complex organic forms and animations including owers, Haeckel-inspired submarine life, and abstract organic shapes. We use examples in each of these areas to detail the main features of the system, which include a set of flexible 3D mesh operations integrated with a Lua-based L-system interpreter that creates geometry using generalised cylinders. 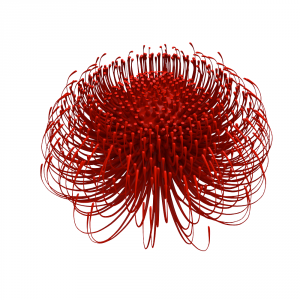