Steph and I hiked down at Wilson’s Prom this weekend over 2 nights. We stayed at Sealer’s Cove and Little Waterloo Bay respectively. The landscape down there is terrific and often changed quite quickly … as you can see in the photos below. Some highlights were climbing up to Kersop’s Peak, trekking over dunes covered in charred trees, and walking on a squeaky beach. We had a great time and look forward to going back there again sometime. Our next hike, however, is a 7 day easy/moderate hike in Tasmania in less than 2 weeks.

Wilson’s Promontory is south-east of Melbourne — about 300km drive.

After downloading camstudio I thought I’d capture some videos of the work I’ve been doing lately.

The current environment I am working on considers objects as being decomposed into discrete tetrahedral elements. The physics is locally volume-conserving, and uses the ideas in “A Versatile and Robust Model for Geometrically Complex Deformable Solids” (Teschner et al. 2004). The rationale for selecting this model is that it is conceptually simple and is fairly fast. The following videos demonstrate some experiments I’ve done with my implementation of the ideas.

This video shows some spheres dropping onto the ground and deforming. The video shows a set of different spheres, each with different stiffness/springiness parameters. The program runs in real-time, however the video is sped-up by 4 times.

This video shows a variety of cubes with different stiffnesses (sped-up by 4 times).

And finally, here is a tetrahedralised cow falling over. The view with the spheres shows the discretisation of mass of the model.

I saw Asimo on the weekend. Asimo is Honda’s humanoid robot. The show was very commercial, and generally aimed at entertainment than education, as you can see in my poorly taken video (you can just make out Asimo in the center.) They demonstrated some of Asimo’s capabilities such as running (at 6 km/h) and carrying a tray of drinks — overall I was quite impressed with the speed and stability at which he (/she/it?) could perform the tasks.

Here’s a video I found of Asimo at a show in Japan …Some post-show googling came up with some other interesting humanoid-like robots, such as these dancers (from Sony?) … they have much smoother and quicker motion than Asimo — though I wonder how much of it is programmed and how much is adaptive.

This has to be my favourite clip though, I laugh everytime I see it (especially the end bit with the maracas). It’s intriguing and entertaining to question the research goal of making humanoid robots — in my opinion they could serve no more goal than entertainment. The research, however, is important as it opens a whole can of theory including adaptive and complex systems, bipedal motion and stability, and research into energy conservation and storage.

The 51st annual meeting of the Australian Mathematical Society (AustMS) was held this week, and ran from Tuesday until today. It was held at Latrobe (Bundoora Campus) northeast of Melbourne, and luckily close (30 mins by car) to my house. The meeting included some plenary talks by some notable figures including the delightful Paul Baum (of K-theory fame), Tony Chan (the Assistant Director for Mathematics and Physical Sciences (MPS) at the NSF), Joe Monaghan (of SPH fame), and Mark Kisin (the 2007 Mahler Lecturer [1]).

There were many other talks on a range of topics, including: Algebra, Combinatorics, Computational Mathematics, Number Theory, and Dynamical Systems, just to name a few. The different sessions all ran concurrently, which made it hard to select which talks to attend. Being interested in many of these disciplines I made a broad selection and have included some (non-technical) comments from the interesting talks here. Graham, Kerry, Rebecca, Judy, Doug, and Ian from the Combinatorics group at Monash (of which I lurk around) also gave talks – however I saw some previous versions of these talks and so did not attend their final versions.

An amusing comment of Alf’s was the “oBdA” should replace “w.l.o.g” in the mathematical literature, as the latter contains ambiguity (w = “with” or “without”) and is too similar to “log”, whereas the former is quite precise in what it means. What precisely it means … I have no idea, but it’s German. :)

Another amusing anecdote of his was a conversation he had with John Conway about Conway’s extraordinary ability to quickly factorise 3 digit numbers.

Alf: “How do you factorise so quickly…? I mean, there are 168 primes less than a thousand…”
John (with a devious smile): “Come on Alf, you wouldn’t have any trouble memorising 168 numbers would you?”

This talk by Quispel was interesting and covered the so-called “Geometric Methods” (formerly known as “Structure-Preserving Methods” of numerical integration of DEs. These methods are for particular classes of equations, and preserve some important property or properties of the system.

A simple example is the autonomous equation:

which (if f(x) is divergence free) has an exact solution which is volume-preserving. Hence it is ideal to use a volume-preserving integrator to solve it rather than a general purpose integrator. Later on Quispel gave three examples of geometric methods: the familiar implicit mid-point method preserves symplectic(?) structure, a variant of the mid-point rule (a so-called B-Series method) preserved energy, and finally a splitting method preserved volume.

An interesting theorem he stated was that, in general, there is no method that preserves energy AND symplectic structure. Great, another one of those interesting, yet ultimately harmful, (meta-)mathematical results…!

Reinout also pointed to the theory of representing elementary differentials by rooted trees (by Cayley) … something that seems quite interesting, I will have to follow this up.

Joe’s been at Monash for quite a while apparently. I think I have seen him around occasionally, though I never realised that he was one of the first people involved in the formulation of Smoothed Particle Hydrodynamics (SPH), which I was exposed to a bit during my work at CSIRO. I’m unsure of the details, but basically it is a particle method for solving PDE’s for fluid, and granulated material. It is used for various simulations (e.g., testing the sloshing of liquid in an accelerating oil sump at CSIRO), for visual effects [3], and I guess for many other engineering/scientific research domains.

Joe is involved in much research with SPH, the latest of which involves the investigation of articulated bodies swimming in simulated fluid environments. He presented some interesting movies of fish-like creatures swimming around a sea of particles, one of which involved a fish surfacing and splashing around.

An introduction to K-Theory

The title of this talk is misleading and by the 6th slide or so I was completely lost. If you don’t know what a fibre bundle, sheaf or germ is, then you would have been lost too. :) I have come across fibre bundles back in my complex analysis / differential geometry education, but I never made it to germs and sheaves. K-theory is a framework for understanding … wait … I actually have no idea what it is. I know what it can be used for though…

Imagine you have a sphere covered in hair. It is impossible to comb the hair of the ball such that there are no discontinuities. If the ball was a 4-dimensional sphere however, then it IS possible. K-theory helps us prove (and understand) this phenomenon.

The talk was too technical for me to follow, however Paul was amusing, and it was great to see him in person.

Chris’ talk was on a generalised calculus that can deal with continuous and discrete time domains. This means the differential equations and difference equations can be treated simultaneously in the same system. He motivated the development of such a calculus with the problem from population biology of non-overlapping generations. This is a problem that involves continuous time scales (the dynamics of a population) with periodic discrete jumps (the example given was an organism that lays eggs that don’t hatch for a length of time, resulting in discontinuous jumps in the population).

The theory goes back to Stefan Hilger in 1988 and has actively being developed only recently. Chris commented on the existence of a fundamental theorem of calculus for this new calculus, as well as the existence of a generalised LaPlace-type transform that has as special cases the ordinary LaPlace transform and the z-transform. I’m interesting in keeping an eye on the development of this.

I attended many more talks, however they weren’t as interesting/accessible as these that I have commented on. My notes for these talks are covered in little sketches — a tell-tale sign of my wandering mind.

Overall the week went well. The Bundoora campus is very nice, and is surrounding by two moats … one water-based, and the other car-park-based. The river seems well tended and there seemed to be families of ducks and ducklings everywhere. I should now really get back to my own, non-mathematical, study….

1. http://www.austms.org.au/AMSInfo/Medal/mahler.html
2. Which can be found here: http://www.maths.mq.edu.au/~alf/ as the document “Richard Guy is 9 plus 0”
3. Apparently the NextLimit engine uses SPH … http://www.nextlimit.com/realflow/

Steph and I headed down to the Grampians on the weekend with my supervisor Alan, his wife Caroline, and a work colleague Alice. We hiked up Mt. Difficult on Saturday, walking for 5 hours in total, but as you can see from the photos it was worth it. The weather was excellent and the views breathtaking, all in all we had a great time and look forward to going back there again sometime. 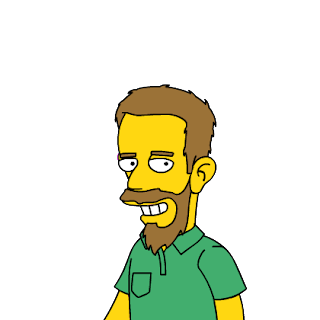 I stumbled across the simpsonizeme.com website [http://simpsonizeme.com/] which takes a photo and converts it to a Simpsons style caricature. You can then manually change the features if the suggestion is not quite right. A few changes later and I ended up with this — close, but maybe a bit too old/yellow. :)

There is also a different manual simpson avatar creator at [http://www.simpsonsmovie.com/] which is also quite fun to play with.

It’s fun to think of the huge parameter space governed by these systems, and maybe an aesthetic/genetic selection mechanism would be better suited to searching through the space or automating the creation of new characters.

So, here’s my first post. This blog will contain my brief thoughts on various topics. The more in-depth articles will be posted on my website (http://users.on.net/~eigenbom), and linked to from here.