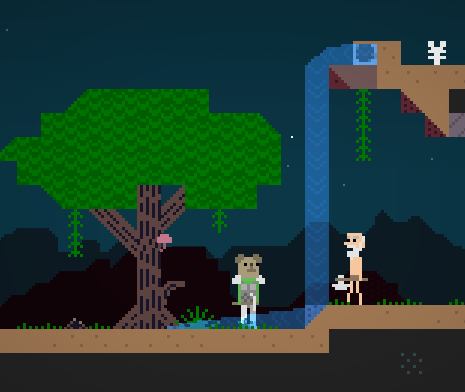 HOLY SHIT
THIS LOOKS LIKE THE COOLEST GAME IVE EVER SEEN!

I WANT TO PLAY IT.

Looking very cool, I look forward to playing it!

Looks awesome – keep plugging away at it

Why is it so… pixelated?

Simplicity and practicality, and also to force me to make an interesting game while not getting hung up on the visuals. I really enjoy traditional rogue-like games, which have really simple visuals, and so I’m trying to follow their lead. As I am the sole developer I also don’t have the time to work on the graphics, so a simple style like this means I can make more sprites in less time, not to mention that maintaining consistency is much easier. Thanks for visiting. [:D]

I got excited reading about your game. You should put it in Steam to be Greenlit, I bet it would! :D

This looks really awesome! What’s even more awesome is that you’re sharing your development process online. This makes such a big contribution to other people’s projects – thanks a lot!